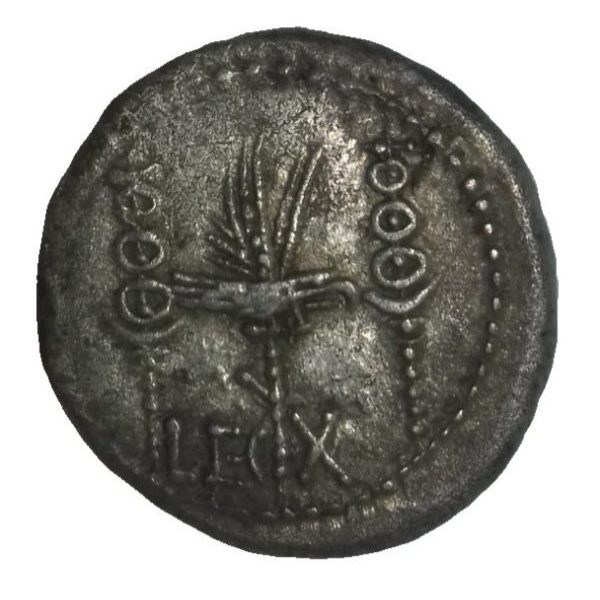 My first favorite coin is Marc Antoine’s denar of the legions. I have several, but today I will dwell on the one dedicated to the 10th legion. What for? Because it is the one that is in better condition simply.

This last was struck under Marc Antoine in honor of the legions. Marc Antoine was born in 83 BC. During his life, he became a lieutenant under Julius Caesar and later Consul. He committed suicide in 30 BC after the Battle of Actium (if you want to learn more about the Battle of Actium, I invite you to read my article 5 important battles of Ancient Rome) which pitted him and Cleopatra against Augustus (Octavian at that time). Going back to the coin, the 23 legions presented at the time of their strikes (-32 to -31) were represented. Each denar is identified to a particular legion thanks to the Roman numerals present on the avers.

Here, this denar is the one for Legion X. Legion X or Gémina (Twin in English) was created in 58 BC and had as its symbol the bull. The first character to use it was Julius Caesar. The latter considered her to be the legions in whom he always trusted. It was used in particular during the siege of Gergovia (if you want to know more about the siege of Gergovia, I invite you to read my article 5 important battles of Ancient Rome).

Subsequently, it was used by Augustus to retake northwestern Hispania, but it was also stationed in Germany or guard in Pannonie. She also took part in various wars and battles. And was dissolved in the 5th century AD. On the avers of the coin, we can see a trière sailing on the right and on the reverse, an eagle surrounded by two banners with the inscriptions “leg X”.

My second favorite coin is a Hadrian sestertius. The one I’m going to introduce to you is the guy who represents a Roman galley on his reverse to signify Hadrian’s return to Rome.

This sestertius was probably struck in 134 AD on the emperor’s return from a trip to visit the various parts of the Empire. Hadrian was born in 76 AD and became emperor in 117 AD succeeding Trajan (98-117 AD) and was therefore part of the Antonine dynasty. During his reign, he set up actions to consolidate the Empire in order to increase its defense and thus conduct a peaceful policy. Unlike his predecessors, he moved many years of his reign to travel in order to better integrate the conquered regions into the Empire and consolidated the borders, notably with Hadrian’s Wall. He died in 138 AD and left power to his successor Antonin the Pious (138-161 AD).

Returning to sestertius, it symbolizes the emperor’s return to Rome as mentioned above. Indeed, Hadrian made a trip of more than 10 years through all the nooks and cranies of the Empire. He went for example to Brittany (current United Kingdom), Gaul, Asia Minor … Some stages of his journey were represented on coins. For example, a coin was minted for his trip to Africa. Here, this sestertius, you understood it represents his return. So on the avers of this sestertius, we can see the bust of Hadrian and on the reverse, a Roman galley sailing to the left. Now, why does this sestertius represent Hadrian’s return? Simply because to return, he took a Roman galley as a means of locomotion. It is therefore the latter that is present on the reverse of this coin.

My third favorite coin is a denar of Antonin the Pious. The one I’m going to introduce you to is the guy with Salus pictured on the flip side. This means the Emperor’s recovery from disease.

This denar was probably struck in 148-149 AD when Antoninus Pius was ill. The latter was born in 86 and became emperor in 138 AD, succeeding Hadrian and also part of the Antonine dynasty. During his reign, he followed the actions of his predecessor by consolidating borders as well. In particular, he doubled Hadrian’s Wall. Also, he is a very devoted emperor to the Senate, to the Gods … which earned him the nickname “Pius.” His reign marked the decline of the Roman Empire as it is believed that the apogee of the Empire came during his reign. He died in 161 AD, probably from malaria with a long reign while the latter began in 52nd year. Marcus Aurelius (161-180 AD) will succeed him.

This denar symbolizes the Emperor’s healing with the presence of Salus on the reverse. Indeed on the avers, we can see the bust of Antoninus Pius and on the reverse, Salus holding a rudder placed on a globe of the right hand and left hand, holding a patère and feeding a snake wrapped around an altar. This scene therefore represents the healing and therefore that of the emperor.

Fourth coin : the Sestertius of Commodus

My fourth favorite coin is a Commodus’ sestertius. The one I’m going to introduce you to is the guy with Jupiter on his flip side.

This sestertius was probably struck in 186-187 AD. Commodus was born in 161 AD and became emperor in 180 AD, following Marcus Aurelius. It is therefore part of the Antonin dynasty. During his reign, he finished the current military campaigns, established various purges in the Roman rulers … His reign was marked by a crisis but also by some changes. For example, he changed the name of Rome to “Colonia Lucia Annia Commodiana” or he changed the name of the months. On this sestertius, we can see on his avers the bust of Commodus wearing the beard signifying his maturity and on the reverse, Jupiter holding a lightning bolt of the right hand and a scepter of the left hand with at his feet, an eagle.

Fifth coin : the nummus of Constantine

My fifth favorite coin is the nummus of Constantine with the two soldiers on his revers. This coin is one of my favorites because it was my very first Roman coin. In addition, this particular one is in very good condition.

So much for my five favorite coins. I hope you enjoyed this article. Don’t hesitate to put your favorite coins in the comment space. For the next article, we are not going to talk about numismatics but more literature. Indeed, this article will be “the 6 most well-known quotations of Ancient Rome.” See you next week! 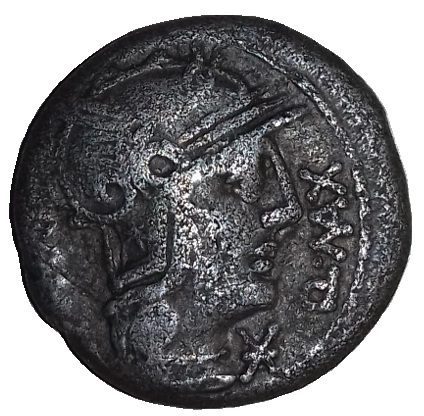 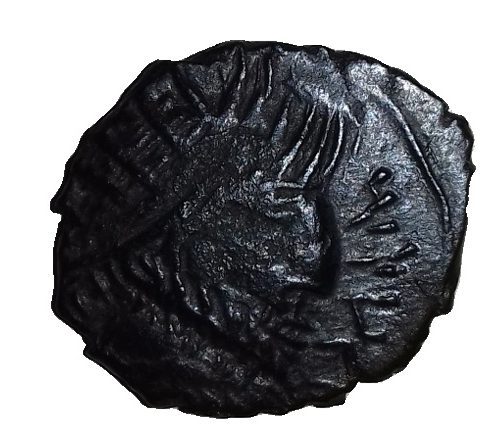 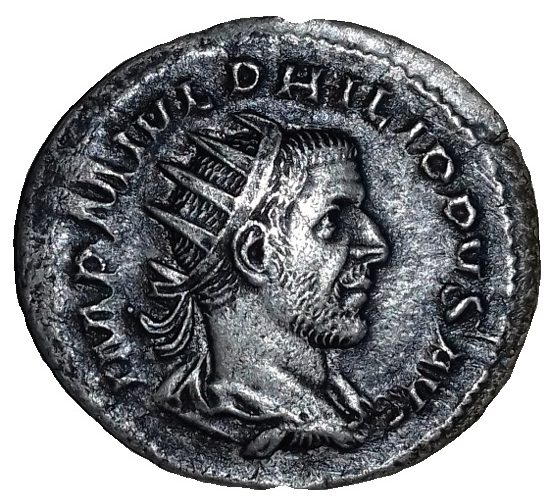